Getting the most from a product based on LED technology can be tricky because of one important factor: how operating temperature can result in a substantial difference between the advertised and actual performance of a LED based product.

Important factors in this effect are the LED quality, product design and heat management: how much of the heat generated while in operation is channeled away.

If the heat is well managed, a LED based lighting product will have performance as advertised, long life and will be energy efficient.

The basics of LED heat management

LEDs use electricity and this process generates heat. This heat needs to be channeled away from the LED in the ambient as efficient as possible. Designing the LED itself and the luminaire for this purpose is called heat management. The heat that needs to be channeled away is directly proportional with the luminous flux and power consumption of the LED.

Heat is channeled away via a thermal circuit.

A simple example of a thermal circuit starts with the LED die, continues via the LED pad to the PCB, the heat sink and finally the ambient.

Each element of this chain plays a key role in the overall heat with which the data is channeled away and has the potential to be a bottleneck, to slow things down.  This must be prevented by choosing the right equipment.

In the case of a thermal circuit, each element prevents some heat to pass through it, a phenomenon called thermal resistance. 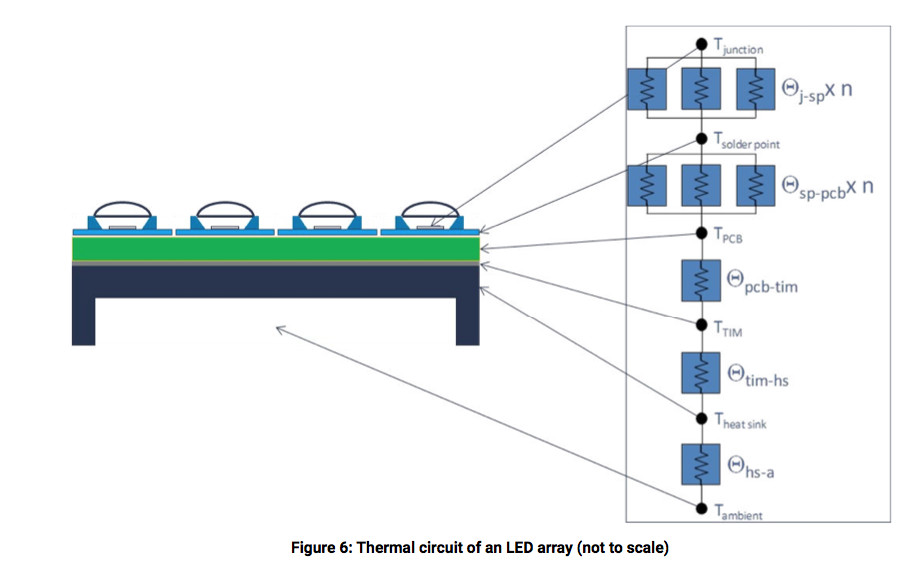 At specific points in the thermal circuit (equivalent to the data network) temperature values are defined. For the array in our example the below are of interest:

With these temperature values we can discover how a LED will perform (Relative Luminous Flux) and what lifetime will it have (L70 Lifetime). Both depend on the temperature inside the LED, called junction temperature, a relationship usually represented in graphs as the ones below. 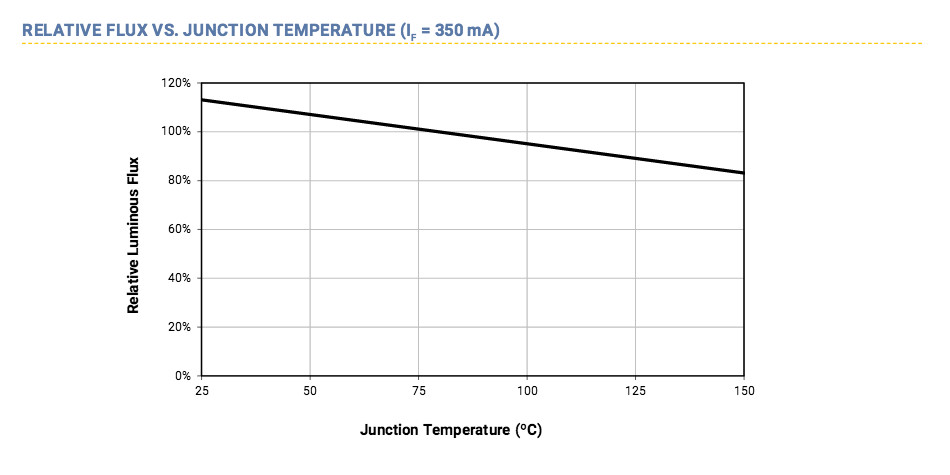 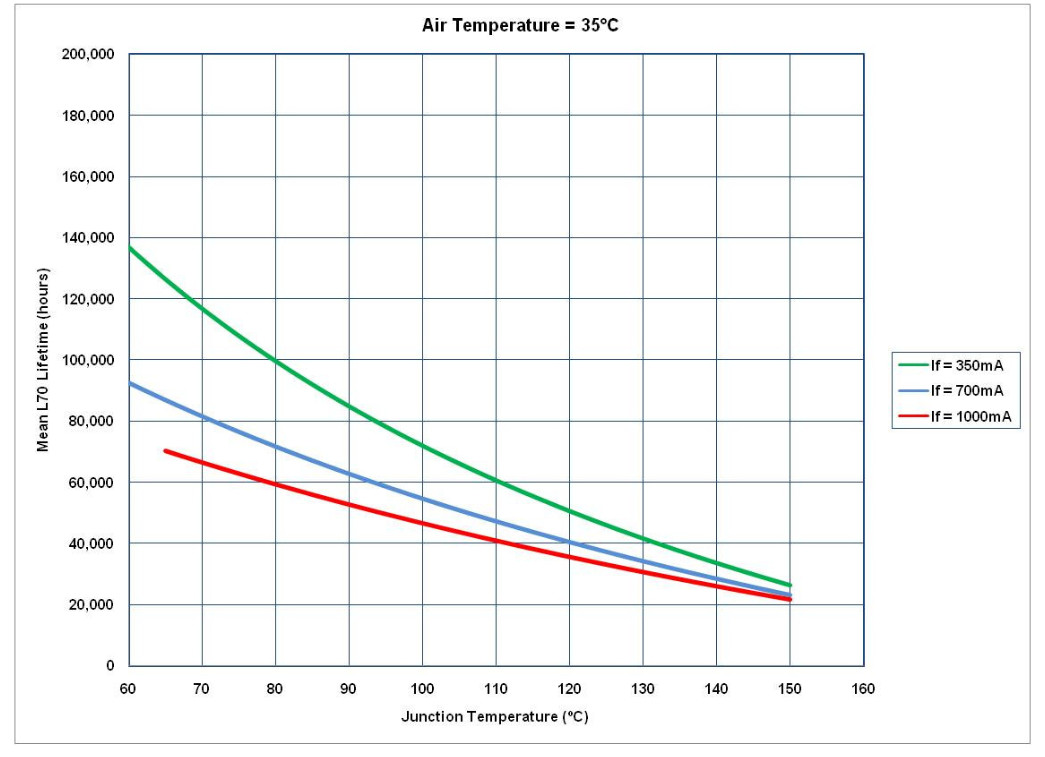 Lets say we install the array in closed luminaire that functions in a hot environment. This can mean an ambient temperature of 60 °C (Ta). We will then calculate the junction temperature (Tj ) to use with the graphs above.

Each LED from the array will have a junction temperature of 125°C.

This information will show us the gap between actual and advertised performance and lifetime.

If the manufacturer of the LED array claims each LED has 100 lumen and 80.000 L70 lifetime at an ambient temperature of 25 °C we can easily notice a gap exists.  With the above calculation and graphs the realistic values for each LED are 90 lumen and 30.000 hours L70 lifetime.

The picture is not always so good. There are many cases in which the gap between real and advertised is very significant.

Below are two examples.

Figure 1: A graph from a random supplier on Alibaba. At 60 °C we are looking at a 40% LED performance drop. While there was no lifetime data available we could safely assume the L70 lifetime is a few thousand hours at best. 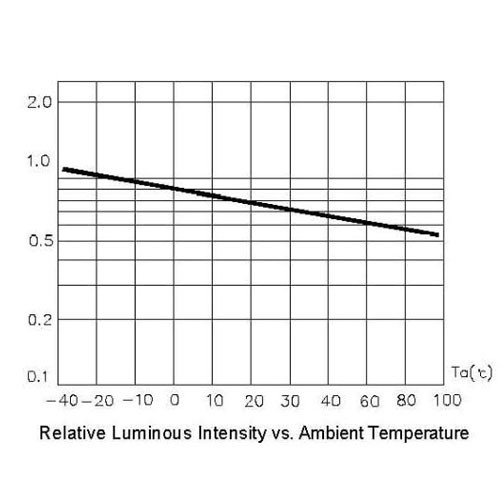 Figure 2: A graph compiled from datasheets of several manufacturers, with the specific LED models mentioned at the bottom. 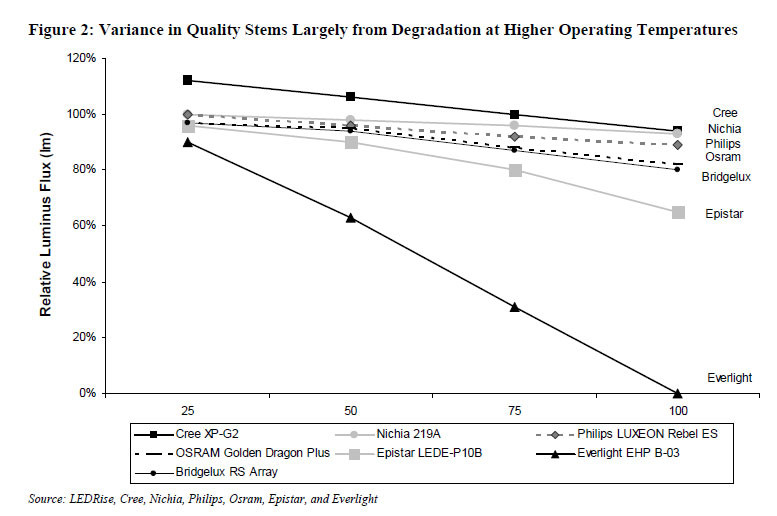 In conclusion, we should always consider the ambient temperature relevant to our project, how good is the LED product at heat management and how the actual junction temperature impacts LED performance and lifetime.

There should also be an understating that a low price usually means poor LED performance at high temperature, inefficient heat management and absent, incomplete or misleading data about the  performance and lifetime of the product outside of a cooled testing chamber.

With the above in mind we have selected the Nichia 757G LEDs as the LED of choice for most our Lumistrips. The proprietary Nichia design of the 757G has the best resistance to high temperature on the market and thus ensures the best performance with the easiest thermal management.