As we wrote in different article, the CRI is a one number quantification of how good (or bad) an artificial source is at reproducing colors, compared with reference standard illuminant modeled after daylight.

It was introduced by the International Commission on Illumination (CIE) in 1974, because of the wide variation in the ability to reproduce colors with the white light emitted by the many types of gas-lamps then on the market. Today, with over 40 years of use, the CRI index is firmly rooted in the lighting industry and among professionals.

However, it has failed to gain much traction among the general public due to the fact that soon after its introduction it became not really relevant when making a purchase decision for lighting.

The reason was that most lamps where built for specific applications that required a minim CRI value so one could not go wrong with the choice of lamp.

For example, for office or all other linear lighting almost everybody used the tri-phospor linear fluorescent tubes, on the market since the 70s, all with CRI over 80. For the home you the choice was between incandescent and halogen both with CRI100, for retail and other high intensity spot lighting there where the metal halide lamps with CRI min 85. Street light was reserved for high intensity and very efficient sodium lamps that although had poor CRI very few cared about it.

From 2000s onward, LED technology changed this. It is the first lighting source that can be used for every application and have the full range of performance and quality level, including the ability to accurately reproduce colors. This comes from the fact that LEDs are built directly into fixtures, lamps and strips, as in the example image below: 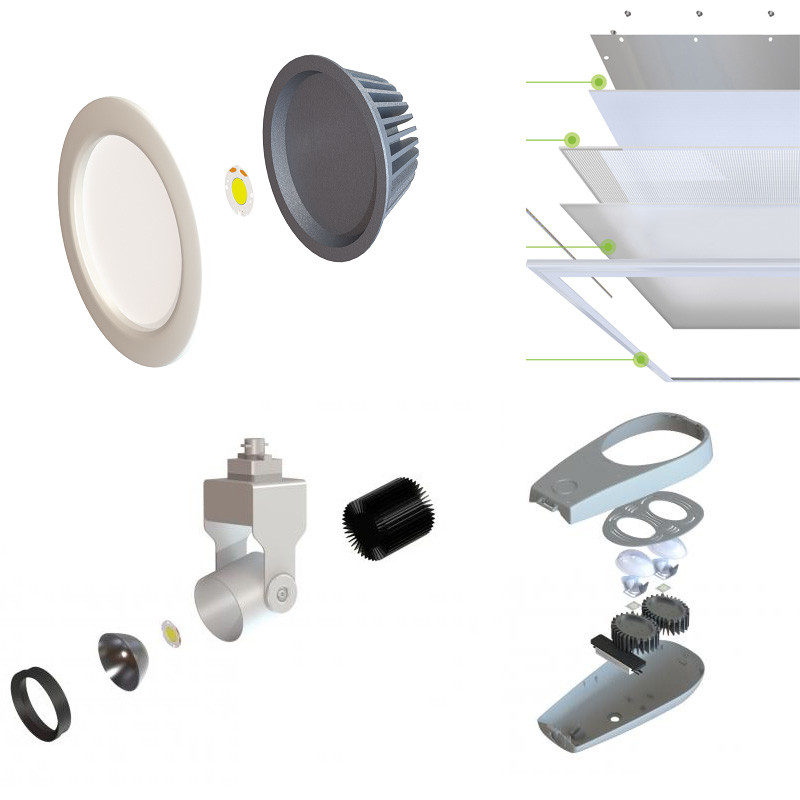 The makeup of some fixture types for common applications, such as down-lighting, spot-lighting, office-lighting and street-lighting. All can use LEDs.

With the increased complexity, the CRI with its eight colors has become not comprehensive enough for an optimum quality test of so many combinations of technologies, wavelengths and color temperatures on the market today. For example both light sources below have the same overall CRI of 82 but very different scores per color. 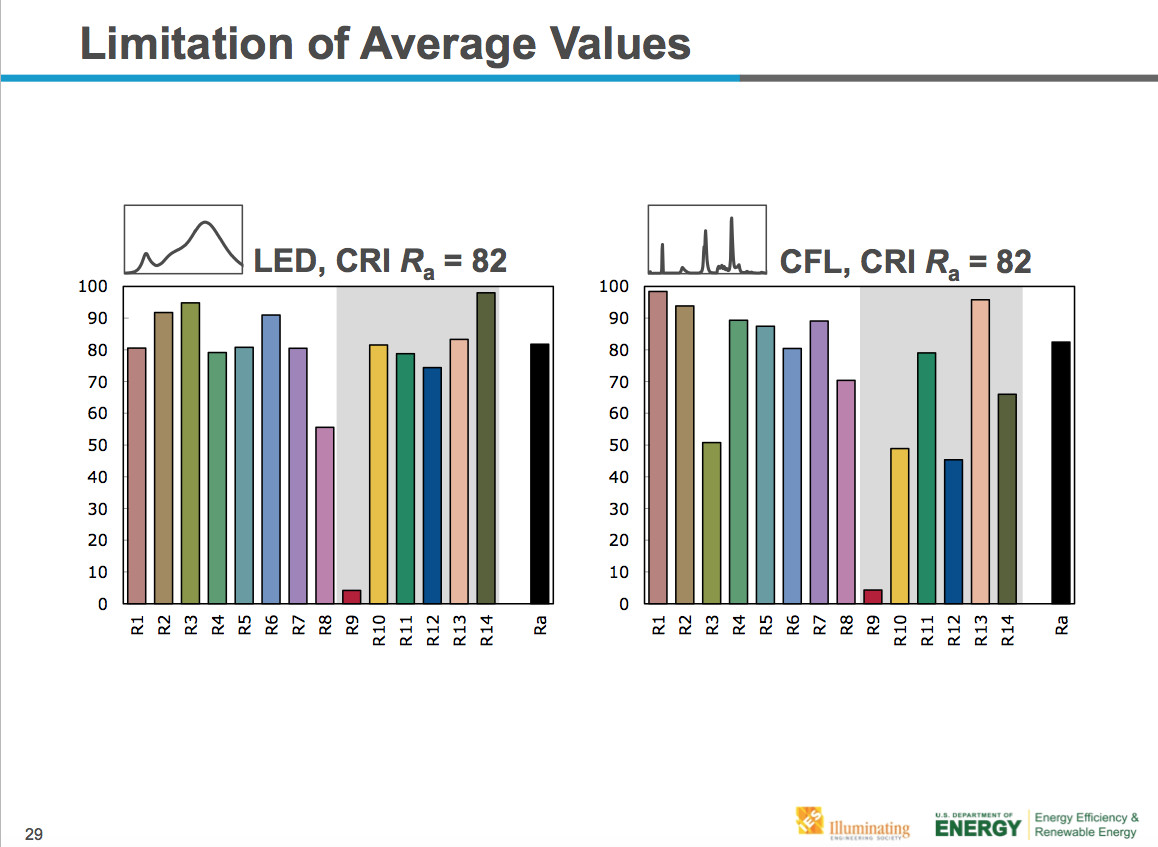 The CRI cannot prevent one from designing a light source, fluorescent or LED, with the specific purpose of having a good score at those eight colors while having a poor color spectrum overall.

So the TM-30-15 is a new standard that tackles this problem. A proposal from the leading organizations in USA, the IES (Illuminating Engineering Society) and DOE (US department of Energy) TM-30-15 comes with the Color Fidelity Index with the same quality scale up to 100 but with greatly increased benchmark precision due to the increase from 8 test colors to 99. 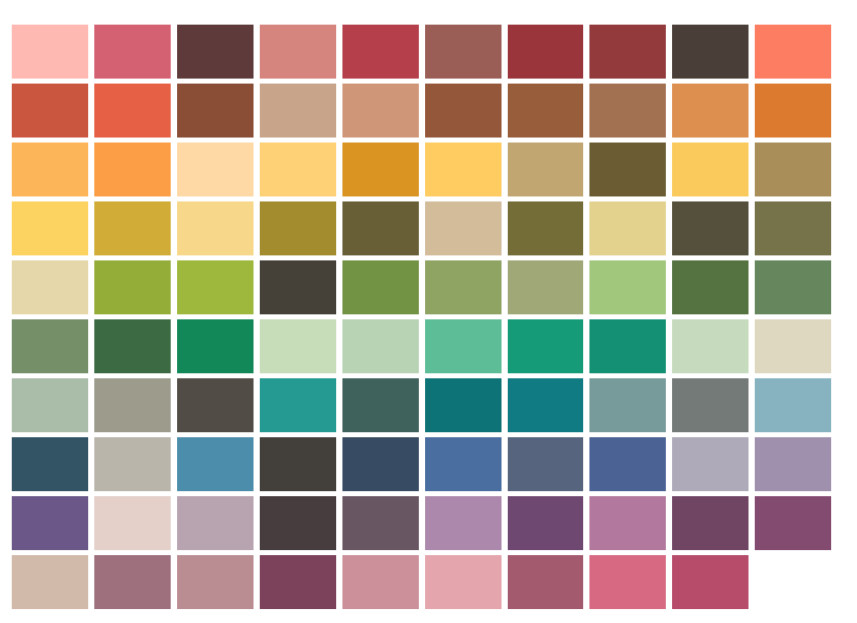 From increasing the test colors substantially it is almost impossible to cheat, as only those light sources that have a high similarity with daylight or the standard illuminant, across the complete spectrum, will get a score greater than 90 or 95. The IES has tested how many light sources would score at Fidelity Index (RF) compared to CRI (Ra): 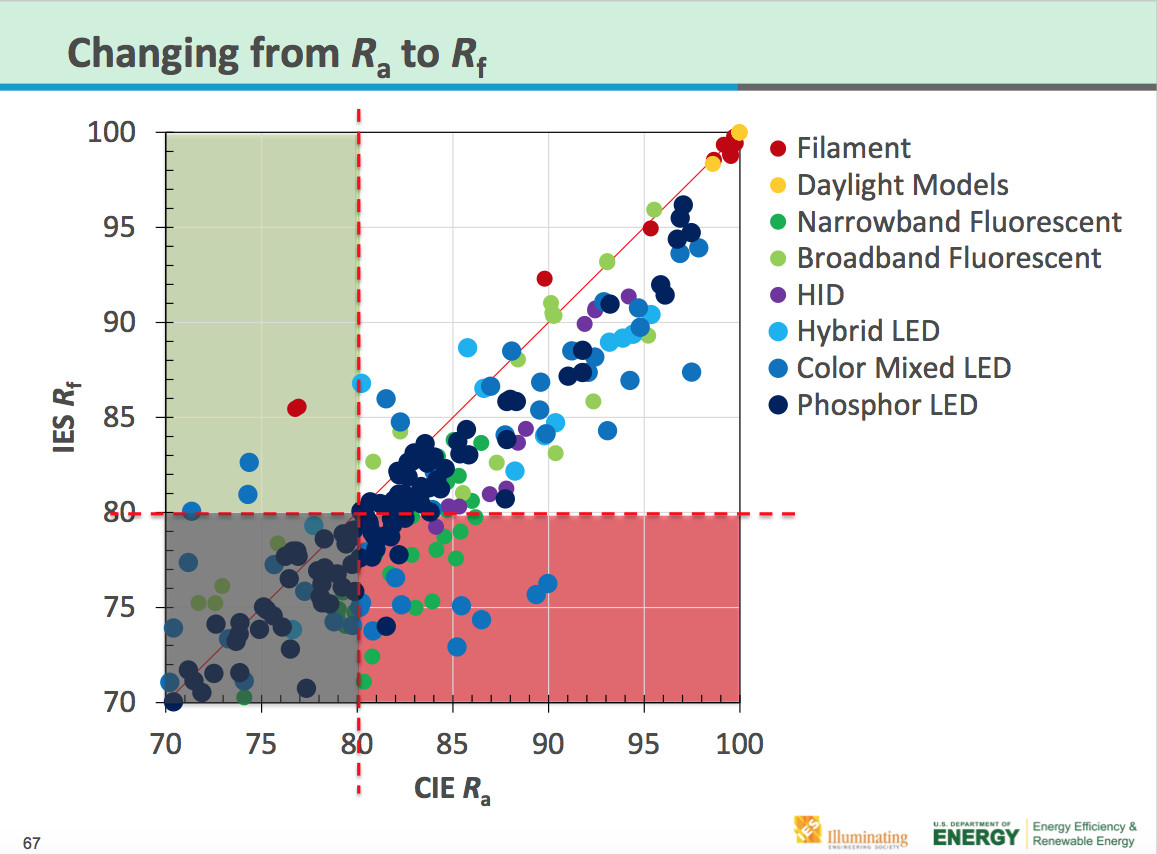 The graph shows that important number of light sources, mainly with LED and narrowband Fluorescent have a Fidelity Index below 80, while scoring at least 80 on the Color Rendering index. The level recommended as minimum required for general lighting is 80 thus by using the new Fidelity Index we will be able to have a choice from only the truly suitable lamps for our application.

To deal with those light sources that are designed to over-saturate or saturated particular colors the IES is proposing a second index, the Gamut Index to be used in combination with the Fidelity Index and equally popularized and included in data sheets and marketing materials. 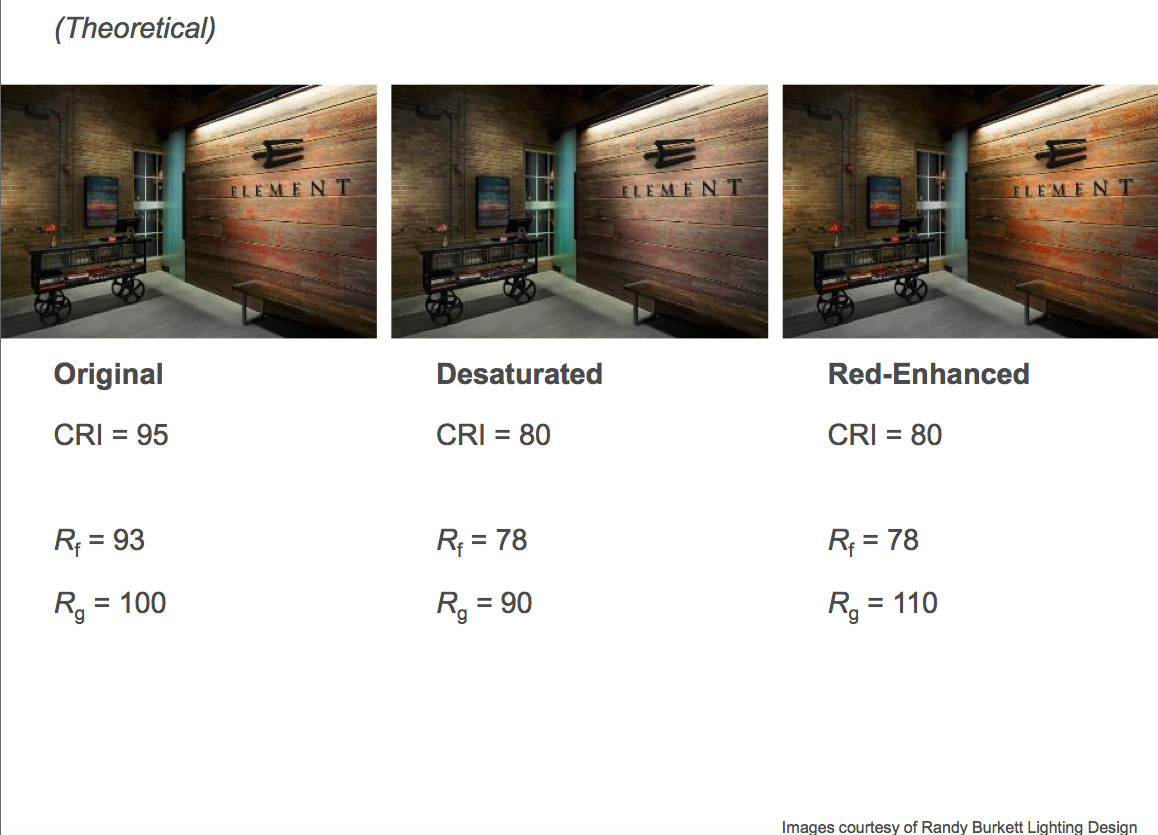 A Gamut Index (Rg) of 100 means the light source does not de- or over-saturate a color pallet, for example red. For the index value from 101 to 140 a progressive over-saturation of color exists and from 100 to 60 a de-saturation.

A colorful graph is also suggested as accompaniment to the number.

By using the TM-30-15 with its Fidelity Index (FI) Gamut Index (GI) 100 it is much easier to choose the LED lights with the best light spectrum.

Currently the highest CRI values for LEDs come from the new technologies such as Nichia Optisolis and Seoul Semiconductor SunLike, both with almost day-like spectrum and maximum scores for all the CRI test colors. They also have similar scores with the Fidelity Index.

Their spectrum and how it compares to sunlight and other light sources can be seen below.

At Lumistrips can find LED strips and modules with both of these new technologies: